Spices That Flavor the Season!

Find this article at:
go.ncsu.edu/readext?900015
— Written By Cheri Bennett (3 months ago) 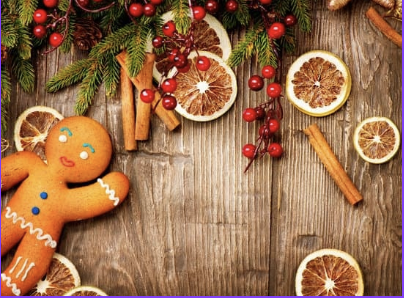 For most of us, the holidays invoke memories of our childhood. The aroma of baked holiday desserts, meats, and delicious side dishes that remind us holidays past. The holidays are also a time when we are inspired to try new recipes and begin new traditions.

The spices used to cook holiday meals are a huge part of what makes the meals and our time together so special. Most of our favorite holiday spices arrived in America from other countries. Let’s explore the origin and uses of traditional holiday spices.

Cinnamon is a very popular spice used during the holidays. It can be found in “pumpkin spice”, beverages, sweet breads, pies, hot chocolate, and even savory dishes such as turkey chili, lamb, butternut squash, and so much more. Cinnamon is native to Sri Lanka, it is also cultivated in South America and the West Indies. Believe it or not, because cinnamon had so many important uses throughout the world, it was once considered more valuable than gold. In Egypt and medieval Europe, it was used for religious practices. In medieval Europe it was also used to flavor foods. For the Dutch, it was the most profitable spice in the Dutch East India Company in the 1600’s and 1700’s, according to Britannica. Today, cinnamon can be purchased in powder or “sticks” of dried inner bark form. Cinnamon sticks are best used in recipes that require slow cooking, which allows the cinnamon to slowly infuse into the dish. Ground cinnamon has a stronger flavor and can be added to quick cooking dishes for lots of flavor. When substituting ground cinnamon for cinnamon sticks it is important not to overdo it. Start by using ½ teaspoon of ground cinnamon per cinnamon stick and add more to taste, if needed.

Nutmeg is another spice associated with the holidays. Nutmeg is native to the Banda Islands of Indonesia. Nutmegs must be of high quality when sold for spice. It goes well with eggnog, baked and stewed fruit, fruit cake, onion based and milk based sauces, curries, and more. The oils found in nutmeg are the major source of flavor for this reason once nutmeg is ground it loses some of the strength of its flavor. Fresh ground nutmeg is the most flavorful. You can test the quality of nutmegs by inserting a darning needle into the meat of the nutmeg if oil seeps out the nutmeg is good. Nutmeg is safe for those with nut allergies, as nutmeg is actually not a nut but a seed.

Cloves smell wonderful during the holidays. In fact, cloves were said to be held in the mouth of the Han-dynasty court so they would have fresh breath when in the presence of the emperor. Many people place coves in oranges at Christmas to give the home a wonderful scent during the holidays. This aromatic spice is believed to be native to the Spice Islands of Indonesia. Cloves are wonderful in beverages, hams, rice dishes, stewed fruits, and spice blends. Cloves can be purchased whole or ground. Whole cloves have a longer shelf life than ground cloves. When substituting ground cloves for whole cloves or vice versa, a rule of thumb is ¾ teaspoons of ground cloves per 1 teaspoon of whole cloves as called for in the recipe.

Ginger is a holiday favorite! There are gingerbread houses, ginger infused meats, custards, breads, and more. According to the National Library of Medicine, it is believed that the Chinese produced ginger as a tonic root for over 5000 years for medicinal purposes. Ground ginger is not as pungent as fresh ginger. If burned, ginger turns bitter. When substituting, remember that 1 tablespoon of fresh ginger equals ¼ teaspoon of ground ginger.

Tips for cooking with spices:

Spices are an essential part of the holidays! The aromas and flavors create memories that will last a lifetime. While enjoying your holiday meals and desserts, take time to savor the spices and remember their rich history and their connection to your family’s holidays past.

If you would like to learn more about foods and nutrition contact Cheri Bennett N.C. Cooperative Extension-Richmond County Center, located at 123 Caroline Street, Rockingham, NC or call 910-997-8255.

The Richmond County Cooperative Extension Office helps provide research-based education and technology to the producers and citizens of this great county. Visit our website at richmond.ces.ncsu.edu