Who Will Grow the Food?

Find this article at:
go.ncsu.edu/readext?823335
— Written By Nancy Power

Seeing the writing on the wall when tobacco was declining in the late 1980s, Derby farmer Jim Lambeth decided to diversify. Having earned a forest land management degree from NC State University, he started raking pine needles year-round, which “has kept us out of any financial trouble.”  He sells 50,000 bales per year from the family land and another 50,000 from other farms. Lambeth and his twin brother, Joe, also started raising chickens. The Lambeths discontinued their 140 acres of tobacco. Their old tobacco barns will “never be used again on this farm.” They increased the peach and vegetable crops, which now include sweet corn, squash, cucumbers, melons, field peas, tomatoes, and green beans. Jim also grew strawberries for many years, stopping after the 73/74 bypass, constructed about 10 years ago, diverted cars away from their farm stand. With the reduced traffic, Jim mostly sells his products wholesale now.

The farm, now called “Triple L” after siblings Jim, Joyce and Joe Lambeth, was started by Roger Derby. Namesake of the Derby community, Roger was a transplant Northerner and one of the first commercial peach growers in the state. In the late 1920’s, Derby sold the land to his overseer, H.R. Currie, who was Jim’s grandfather. Jim’s dad, Donald Lambeth, married into the family after meeting Jim’s mom, Frances Currie, on a blind date. Donald started farming on his in-laws’ farm. Ninety years later, the land is still in the family. Jim’s son Jed, the 4th generation on the farm, has taken over the chicken operation. At any given time, he has 450,000 chickens in 18 houses. Meanwhile, Joe has retired and Jim continues to grow the vegetables and peaches.

“Peaches are really high quality here (in the Sandhills),” Lambeth says. This year a late cold snap killed many of the young peaches, but the silver lining was that he did not have to thin them as usual. The peaches were the largest size ever, with some weighing up to 1 pound.

Lambeth fertilizes the crops early in the season with manure from the chicken houses, even though the manure seems to make the weeds worse. Pigweed has replaced ragweed as the worst weed. “Crabgrass is a thing of the past with all the herbicides we have now,” he says. He hits the weeds before they make seed. When Lambeth was young, herbicides were not in use yet. The herbicide companies “keep a step ahead of the weed species,” he notes. Lambeth also applies commercial fertilizers, based on soil test results. He irrigates all of the crops, including the peaches, with a hard hose traveler.

The sweet corn Lambeth grows has Bt built-in to protect it from corn earworm. Although the seed costs up to $190 per acre, it pays for itself because he does not have to spray insecticides. He does spray the peaches every 10-14 days, primarily to control diseases that would make the fruit inedible.

In winter, Lambeth grows a cereal rye cover crop and then turns it under in the spring. Like most of the Sandhills soil, his has less than 1% organic matter. The rye adds organic matter temporarily, helps keep the soil from blowing away, and stores nutrients in the soil rather than letting them leach out. Even though the soil is not as fertile as in other areas, “it’s not bad for sand land.”

Starting as a child, Lambeth has worked on the farm for 60 years. He finds that as he gets older, both the hot and cold weather are harder on him. He also notes that commodity prices are not good. What “will put me out of business,” however, is the lack of affordable, seasonal labor. “Wages have gone up tremendously,” he says. “Starbucks pays $19/hour.”   “I’m at the end of my career. I just don’t know if I will plant next spring.”  He also would like to lessen the load for his wife of 48 years, Marcia, a retired teacher. She manages the farm stand and has made it into a museum of rural American life. “I love my wife more now than ever,” Lambeth says.

Jim and his family made good decisions over the years that enabled him to continue farming full time and earn a good living at it. Those decisions, and the immense work of implementing them, led to Triple L Farm earning the Richmond County “Farm of the Year” award in 2019.

In the big picture, though, Lambeth worries that earning a living by growing food is getting more difficult. If no family members pick up growing the vegetables and peaches, Jim’s retirement will contribute to Richmond County’s trend toward less annual fruit and vegetable production. Indeed, in the entire U.S., the average farmer age is in the late 50s and rising. “What are we going to do when the food supply is out?” Lambeth asks. 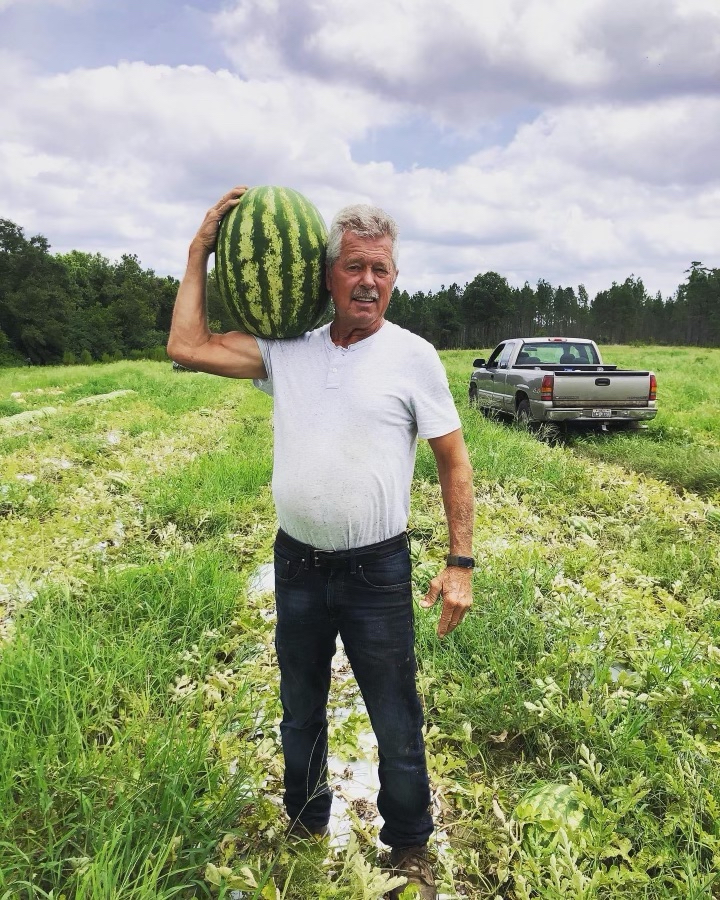 Outstanding in his field: Jim Lambeth shows off a giant watermelon he grew.