Find this article at:
go.ncsu.edu/readext?820780
— Written By Nancy Power and last updated by Cheri Bennett 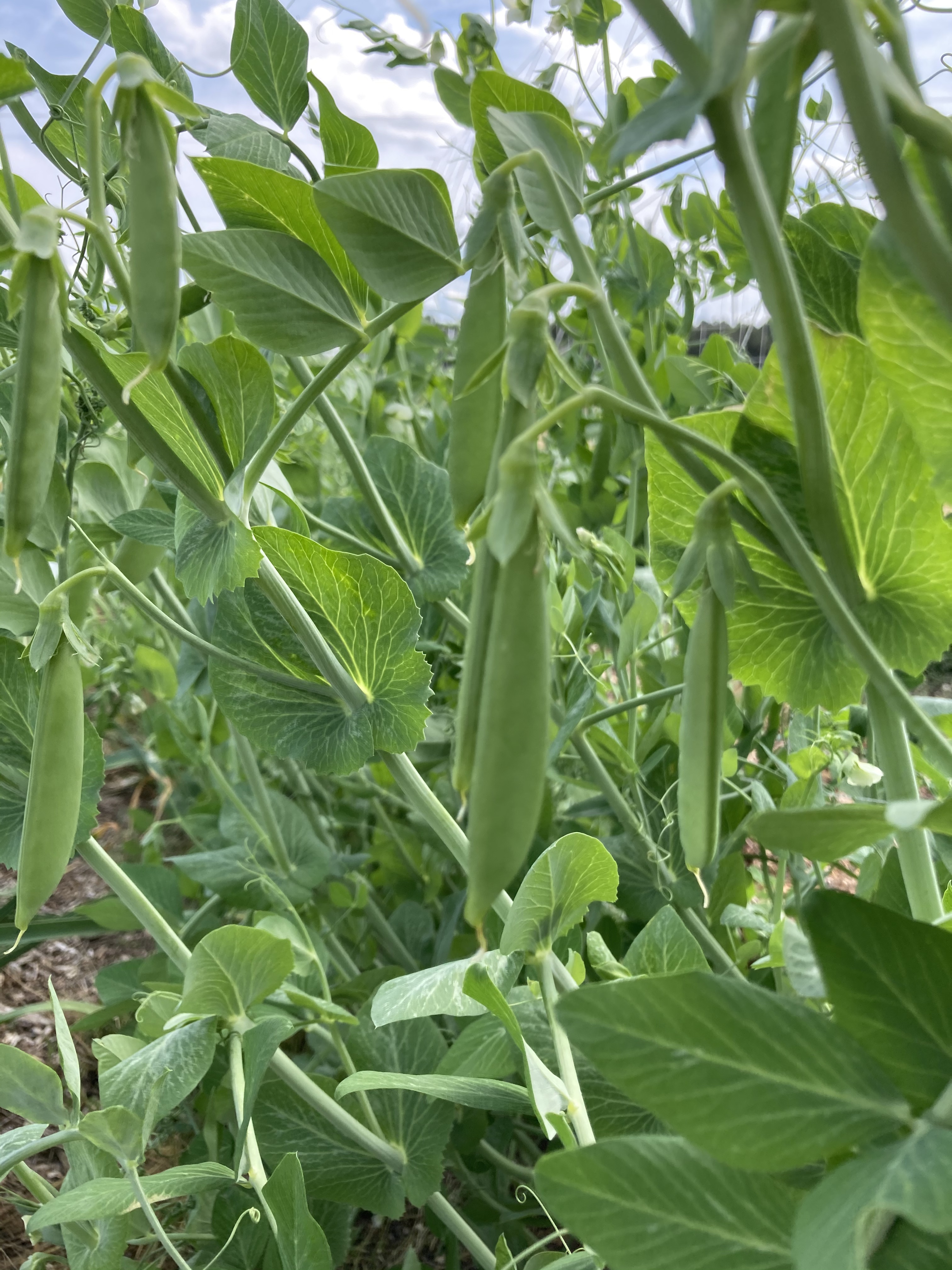 Fertilizer amounts were based on a soil test done the previous year.

The fertilizer includes 30% more than the recommended amount to make up for our sandy soil.

I harvested 42 lbs. each of snow and snap peas, but that was not nearly all that could have been picked if someone had picked every other day consistently. I discarded a lot of peas that had gotten too large, and I stopped harvesting snow peas long before they were done producing, due to the lack of markets. At $4/lb wholesale, revenues for the 84 lbs. would have been $336, or $168 per bed.  Revenue – cost = $85/bed (without labor). Note that the T-posts were 44% of the cost but they are a one-time cost. They can be reused indefinitely, and the netting could be reused at least once if it could be untangled. The drip tape and connectors likewise can be reused.

People in Richmond County do not buy edible-pod peas. We would have to create a market to sell locally. Edible-pod peas are reported to be popular in Kentucky through direct marketing.

The NC farmers market selling price at the time was $6/lb. This crop could be profitable if markets were in place. The Sandhills Farm-to-Table CSA is willing to buy peas, but this year they had fewer clients so they had enough peas from the Moore County growers. The director can buy peas from wholesalers such as Fresh Point, so she does not recommend that local farmers grow them. She still might buy them, though, especially if they were grown in the high tunnel to be available before the field-grown peas. Restaurants might be another option.

The netting I used was very inexpensive compared to other options but it was difficult to untangle while hanging it. Two people were needed to do it properly, both to untangle it and to pull it taut.

The quality of the snap peas was excellent before they got the pea enation mosaic virus. Even though I removed plants as soon as they showed symptoms, the disease spread to most of the snap pea crop in the end.

The Oregon Giant snow peas are larger than other varieties of snow peas, and according to the Johnny’s catalog should be picked when they are 4” long instead of 3” for normal snow peas, but still flat. The Oregon Giants tasted much sweeter at the larger size.

I would like to try adding organic mulch such as wood chips or straw to the beds to keep the soil evenly moist, inhibit weeds, and add organic matter to the soil for the next crop.

We had a dry spring. The peas might have more and/or sooner disease problems in a wet spring. Preventative fungicide sprays, especially for powdery mildew, would likely help.

I recommend putting the trellis on the downwind side of the pea plants (in this case, the east side) since the plants end up there anyway.

Growing 3 rows/bed was an efficient use of bed space, but the plants were so dense that it was hard to see all the peas. I usually picked in one direction and then went back again in the opposite direction. The new angle of light revealed peas I had missed. Even then, I could tell the next day that I had missed some. Maybe a young person with better eyes would have less of an issue finding all of the ripe peas.

Leaf-footed bugs were prevalent by May 23. They make the peas unmarketable.

Growing in winter was great. Insects and weeds were not a problem for the first 3/4 of the season. I would also recommend starting earlier than late February/early March. The seeds will wait to sprout until the soil is warm enough. I would try a first round the last week of January, and add a bed every two weeks through the end of February once the plants started growing, for 2 or 3 plantings total. I got the January date from the South Carolina Cooperative Extension recommendations for Marlboro County, just south of Richmond County. Moore County Sandhills grower Gary Priest does a similar succession, but he starts planting around Valentine’s Day and ends March 10.

In spite of removing diseased plants as soon as they showed symptoms, the pea enation virus spread to almost all of the snap pea plants eventually. I would recommend that local growers choose cultivars that are resistant to powdery mildew and pea enation mosaic virus. According to the Cornell Vegetables website, this includes the snap peas Cascadia, Sugar Lace II and Sugar Sprint. However, Mr. Priest grows Sugar Ann successfully. That is the variety his customers like most. It might help to scout carefully for aphids and spray them, as the virus is spread by aphids. The Oregon Giant peas are resistant to the virus, as are some other snow pea cultivars.

Six products registered for control of powdery mildew on peas are listed on p. 246 of the 2021 Southeastern Vegetable Crop Handbook.

Here’s a 2017 economic assessment from the University of Kentucky: “The following projected budget figures for 2017 are based on 1/5 acre of irrigated snow peas yielding 1,000 pounds and direct-marketed at $3 per pound. Production costs are estimated at $710, with harvest and marketing costs at $1,660. Total expenses, including both variable and fixed, would come to approximately $2,600. Presuming gross returns of $3,000, returns to land, operator labor, capital, and management would be approximately $400.”

The harvest is labor intensive and requires picking at least every other day.

I graded while picking and sold the peas bulk, which eliminated the packing/grading aspect. The labor harvest includes time to remove the culls so that the plants keep producing.

I sold some peas to a local farm stand. The snap peas got mislabeled as “English” peas, which may have reduced their sales. I recommend that growers label the product in large letters and discuss the marketing with direct-market vendors. Besides labeling, perhaps the vendors could put out recipes, offer taste tests, and keep the peas chilled by putting ice packs underneath the sales bins.

Asian markets might be good for snow peas. The only customers that bought our snow peas were Asian.

Snap and snow peas are relatively easy to grow since they grow in late winter/early spring before the insects, weeds, and plant pathogen populations have had time to build up. Growing peas is a good use of land that is otherwise fallow at that time of year. At planting time, the labor is not competing with other tasks unless the farmer is also growing strawberries. On the downside, harvesting is labor intensive and occurs around the same time the grower is prepping and planting summer crops. If a local farmer chooses to grow peas, I recommend that s/he establishes the markets in advance, because the peas don’t sell well in the local direct markets in Richmond County.