Find this article at:
go.ncsu.edu/readext?816498
— Written By Nancy Power 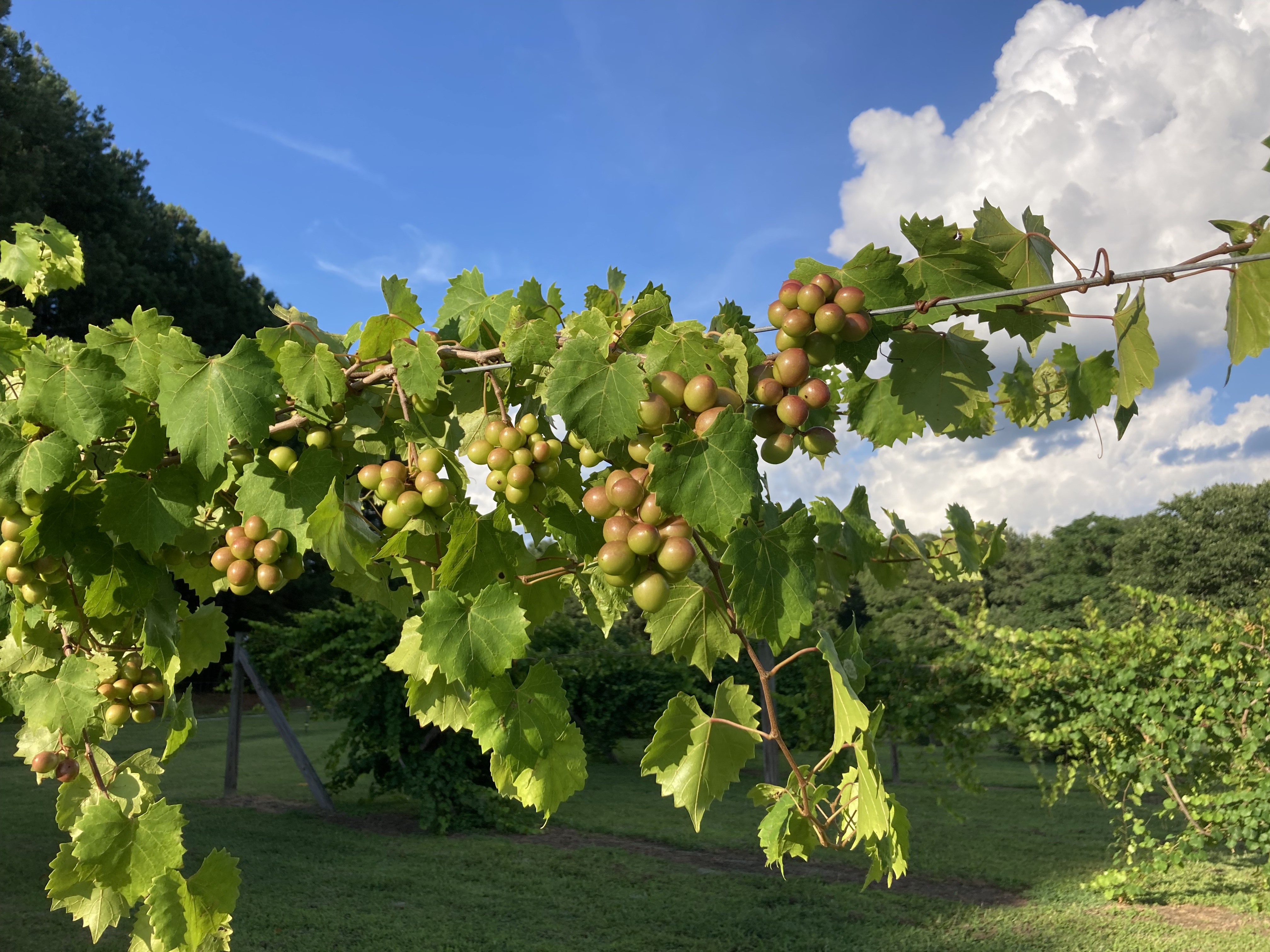 What do muscadines have to do with fighting cancer? An anonymous donor was curious enough about this question to donate $20 million to Wake Forest Baptist Medical Center in Winston-Salem in 2015 to answer it. Researchers investigated the effects of a proprietary blend of muscadine seed and skin extracts created by the Piedmont Research and Development Company in North Carolina. The blend is called MGE for Muscadine Grape Extract. MGE contains phenols, antioxidant compounds produced in the grape skin and seeds. Native to the southeastern U.S., muscadines contain more and different phenols than regular grapes, which are from Europe. The same phenol compounds that help protect the vines from pests and diseases in our hot, humid climate may help protect people from cancer.

Although most of the results in human patients have not been reported yet, the above study and others have shown that muscadine phenols can effectively fight cancer in cell cultures and in mice. Unlike standard chemotherapy, an initial study found muscadine extract to be safe and well-tolerated in people. In other human studies, muscadine extracts were shown to lessen high blood pressure and diabetes. Therefore, one reason to grow muscadines is due to the increasing popularity of the grapes as their health benefits are elucidated.

A second reason for growing muscadines is that, while we used to have several muscadine pick-your-own operations in the region, many of those growers are no longer with us and only one relatively new U-pick farm has replaced them.

A third reason for growing muscadines is that, unlike most other horticulture crops, they grow well here. Being naturally resistant to our local pests and plant diseases, they require less effort than other fruits, vegetables, nuts, and ornamentals. One of our county farmers, John Matheson (who does NOT have the added difficulty of sandy soil) uses no insecticides or fungicides on his muscadines, and does not irrigate the vines once they are established. The Cooperative Extension recommends preventing or treating grape root borers if they are present, but not the more common aphids or Japanese beetles, whose damage does not usually limit production. No economic thresholds are in place for Japanese beetles in North Carolina. Vines can be inspected for damage visually in the summer. Treatment is usually cost effective only to protect young plants or if plants are defoliated below the trellis wire. Damage above the trellis wire is actually helpful for opening up the canopy.

The initial cost for muscadine establishment is around $7-10,000 per acre, which includes the trellis and grapevines. Once established, the vines require relatively little attention. Weeds can be managed with herbicide on days with no wind. Apart from harvesting from late August into September, the main labor need is for pruning, which can be done in the winter when other labor needs are at a minimum.

Over the past 30-40 years the number of days with heavy precipitation (3+ inches) has increased in our region. Our well-drained, sandy soil is advantageous for preventing flood damage. The high winds of hurricanes, however, can topple trellises and devastate the crop. Hurricane damage can be minimized by reducing row length so if a row falls over, less yield is lost. Other measures include pruning to reduce the canopy surface, planting on a slightly elevated site at least several feet higher than the nearest creek, planting only on sites with good drainage, and identifying agriculture natural disaster resources ahead of time so that you can act promptly and effectively after hurricane damage occurs.

Freeze damage is also an issue, especially in the popular Supreme variety. If the trunk or cordon is freeze-damaged (the newer, outer layer separates from the older, inner layer), it must be removed. A new sucker or shoot can be trained to replace the damaged one, but at least one year’s crop is lost. In contrast, freeze damage to flowers after bud break lessens production in the current year only.

With the extensive variety of muscadine cultivars available, a grower can choose to prolong the harvest season and grow grapes for different purposes, such as U-pick, fresh market, processing, and wine. For example, the early Triumph cultivar can be followed in harvest with mid-season Supreme and then Late Fry. For wine grapes, Nobel can be harvested before Doreen.

For processing the grapes, a new option may be available starting this fall. County residents Clarence & Tanya DuBois of Gabor Farm have purchased a building at 727 Hancock Street in Rockingham to house a cooler and commercial kitchen. They will arrange for food processing classes to be conducted on-site for up to 12 customers. Processing creates a shelf-stable product that can be used to diversify product offerings.