Report From the Salad Bowl

Find this article at:
go.ncsu.edu/readext?808112
— Written By Paige Burns 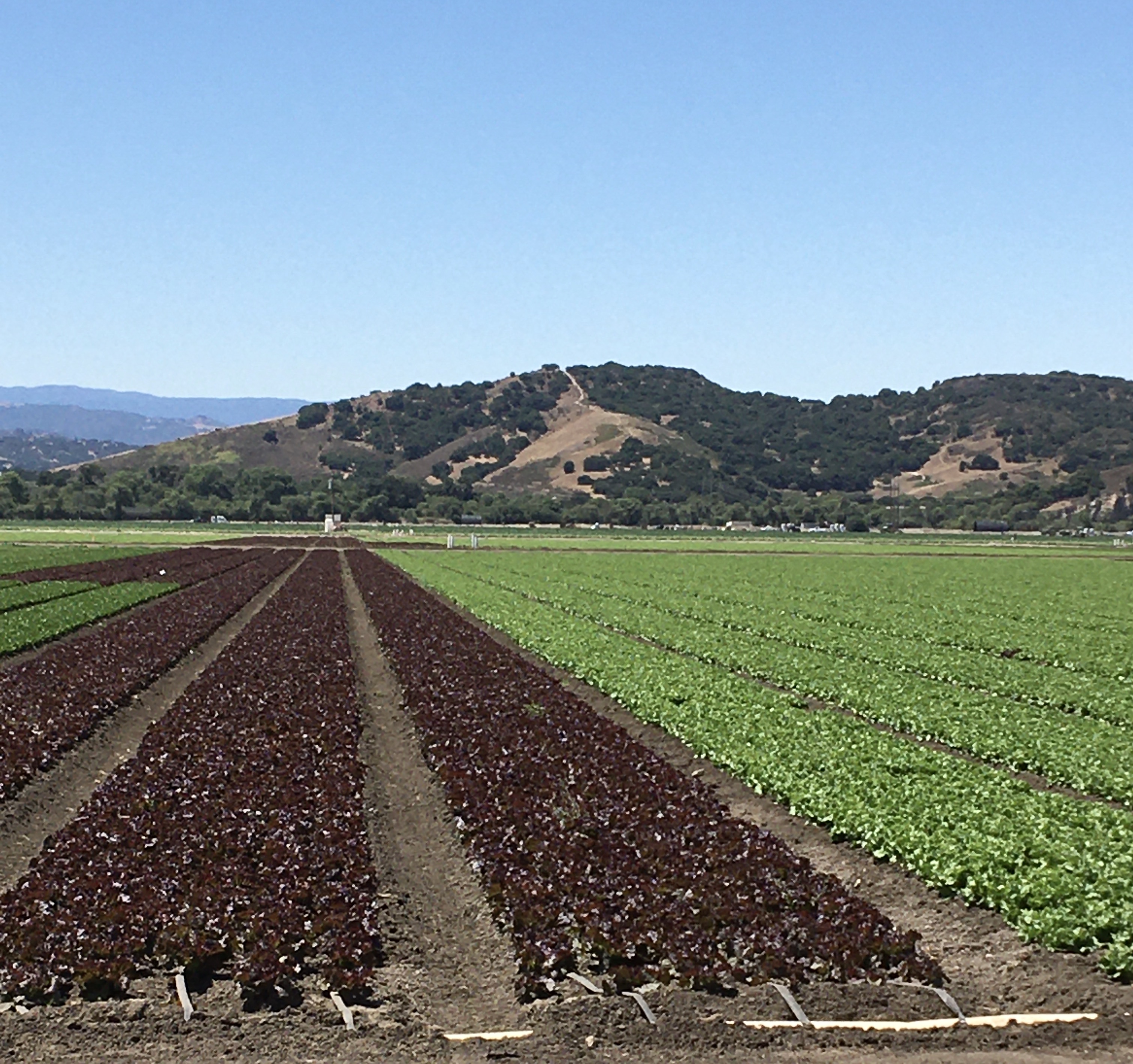 I am writing this column from Monterey County, California. While my trip is for personal reasons, the horticulturist in me can’t help but be fascinated by all the horticulture crops growing so abundantly here. The agriculture industry began in the Salinas Valley in the mid-1800s, and by World War 1, the town of Salinas was one of the wealthiest cities per capita in the country due to the agriculture industry. Agriculture here has been through several iterations over the past two hundred years, beginning with dryland farming of grains in the early 1800s, then a dairy hub (Monterey Jack cheese is named for a land baron, David Jack, who promoted the shelf-stable cheese developed by immigrant Swedes), sugar beets, and now the current industry that supplies more than half of the country’s lettuce, broccoli, celery, artichokes, and numerous other fruits and vegetables from the single county of Monterey. Overall, California produces over 80% of all fruits and vegetables we eat in the United States.

The manager of the Salinas Visitor Center gave us a tour of the history of Monterey County and the Salinas Valley. Through photos and relics from the 1800s, he told the story of how the Southern Railroad wanted to promote California, to entice people to move to the area who would then be prospective riders of the rail service. Developments such as the transcontinental railway in the 1860s made the journey to the western frontier more affordable, safer, and faster, transforming months of dangerous travel in covered wagon that cost $1000, to a week in a train at $150. Farmers were wanted in particular, to feed the growing population. The increasing use of irrigation turned the fertile but dry land into a veritable horn of plenty. The Salinas Valley is often called “the Salad Bowl of the World” due to their production of all types of vegetables. The term “salad bowl” itself was a marketing creation of the Southern Railroad, which promoted putting a salad in a bowl rather than on the plate, for easier eating on a moving train. The newly developed concept was then extrapolated to describe the region’s prolific horticulture production. On our trip, we saw perfect field upon perfect field of lettuce of numerous varieties, broccoli, cauliflower, English peas, celery, raspberries, and strawberries. Everything was beautiful, with very few weeds and no pests or disease in evidence. Every day temperatures are in the low 70s, the nights are in the mid-50s. There’s little rain, so diseases don’t spread. I don’t know why they don’t seem to have insect pests here, but I didn’t see so much as a Japanese beetle on the lush roses that grow everywhere in home gardens.

On the other hand, here in North Carolina, we constantly contend with blistering heat, freezing temperatures, pests, disease, flooding, drought, hurricanes, hail, and more, just trying to make a crop. Why do we keep at it when California appears to do it all so well? California may have the perfect soil and climate to grow vegetables, but they are not without their own troubles. The annual rainfall is Salinas Valley is 19 inches annually; NC annual rainfall is about 45 inches. So, while the soil is fertile, and the weather perfect for growing a wide variety of crops, it’s all dependent on the availability of water for irrigation. While the Salinas Valley is much better situated for water than the Central Valley of California (which depends on snowmelt), the very deep and reliable aquifer is still a finite resource that is being steadily depleted, especially during periods of drought such as the area is currently experiencing. Saltwater from the ocean – here, farming is literally right next to the sea in some areas – is penetrating into the freshwater aquifer used for irrigation, in much the same way that is occurring in eastern North Carolina. If water use becomes restricted in California, it could impact crop production levels. Other unknown factors in the future such as high gas prices, changes in weather, or natural disasters could inhibit transportation of fruits and vegetables to the east coast. For example, drought and a heatwave in other parts of the West Coast currently have farmers cutting back on fruits and vegetables and pushing up thirsty fruit and nut trees due to lack of water.

President Richard Nixon’s Secretary of Agriculture Earl Butz once famously said to farmers: “Get big or get out.” While the benefit of efficient production is no less true for farming than for any other industry, we saw as recently as last summer how crops were destroyed in fields in Florida and other big production areas due to supply chain issues caused by the pandemic. It is important to have and, especially, to support, farmers close to home. To buy at farmers markets and farm stands, and help new farmers who are just getting started. The Sandhills AGInnovation Center in Ellerbe is a food hub that supports farmers in the region and across the state. A diverse and local agriculture industry is truly a matter of national security, and it relies on each of us to support it for the industry to continue to thrive. And really, I’ve still never had anything as delicious as a good, North Carolina Sandhills grown peach.