Find this article at:
go.ncsu.edu/readext?637155
— Written By Paige Burns 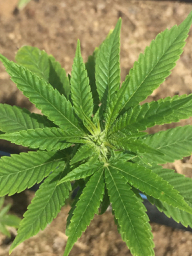 Have you heard about hemp? I think everyone has at this point. I’ve never witnessed such excitement in a new crop, or fielded so many questions from farmers and non-farmers alike interested in growing it, for the production of a crop that still has a million unknowns on everything from how to grow it, process it, and sell it.

Hemp has a fascinating history. Prior to the early 1900s, hemp was widely grown for numerous uses. Hemp is a very durable fiber, and was used for fabric, rope, and paper, and as animal feed. A crackdown on marijuana in the 1930s began to impact the benign agricultural crop hemp, and the 1970 Controlled Substances Act placed both marijuana and hemp under the jurisdiction of the  Drug Enforcement Administration, making both hemp and marijuana a Schedule 1 drug. Since it is impossible for law enforcement to tell one product from the other, hemp was painted with the same brush as marijuana, and banned from production for many years.

The reason hemp was lumped together with marijuana is that they are basically the exact same plant; they are both Cannabis sativa. It is impossible to tell one plant from the other just from appearance and smell. The difference is plant breeding, creating cultivars that have widely variable characteristics. Hemp WILL NOT get the user high if smoked or ingested. THC (technically, Tetrahydrocannabinol) is the primary psychoactive constituent in marijuana and one of over 100 cannabinoids manufactured in the cannabis plant. In industrial hemp, the legal limit of THC is .3%, well below a threshold that can impact a user; industrial hemp growers are primarily interested in the cannabinoid CBD. There are dozens of different cannabinoids, and proponents believe these compounds provide benefits ranging from relaxation, reduction in anxiety or pain, and could be a remedy for other health concerns with fewer potential side effects than some prescribed medications, such as opioids.

In the 2018 USDA Farm Bill, industrial hemp was separated from marijuana under the Controlled Substances Act, and is no longer a Schedule 1 drug. In North Carolina, regulations around the production of hemp are still being developed. The Industrial Hemp Commission oversees the production of hemp in the state, which is operating under provisional regulations developed when hemp was a pilot program prior to legalization. An individual must submit an application to the commission in order to get a license to raise hemp, requiring a Schedule F, a tax form used by farmers. There is cost for the license, at a minimum $250 and up, depending on acreage grown. Considering that three years ago there was virtually no hemp being grown in North Carolina, it’s amazing to consider there are over 1000 hemp grower licenses issued in the state this year, representing over 16 thousand acres of field production and almost six million square feet of greenhouse production.

While it’s good to see hemp legal for production again – it has many uses and can potentially provide health benefits – there are a number of unknowns. As I’ve heard many times over the past two years, when it comes to hemp production, it’s “the Wild West”. There are many misrepresentations when it comes to hemp production. It does not “grow like a weed, with no water or fertilizer”. Early research is leaning toward fertility recommendations similar to field corn. “Hemp has no diseases or pests”. In fact, budworms (caterpillars of differing species), mites, ants, aphids, molds, mildews, fungi, and weeds – all are very happy to infest hemp crops to a great degree. The problem is, as a brand new crop that is grown for human consumption, there are very few pesticides labeled to control these pests. What is labeled has low efficacy. It will take several years before effective pesticides are labeled to control numerous pest problems in hemp.

What could be the biggest problem with hemp? Economics. Widely optimistic predictions for profits have been suggested, tens of thousands of dollars per acre. With very few (not personally verified) exceptions, I haven’t heard of profits anywhere close to this number, but many more reports of high losses. It’s an expensive crop to grow – transplants are best, and they are pricey; lack of pesticides means weeds and insects must be managed by hand; harvesting and post-harvest drying also requires quite a bit of handling, and perhaps worst of all, many observers point to overproduction of the crop which is already driving down prices. CBD hemp is grown for two products: oil and flowers. The oil is derived through processing, and like any value-added crop, the “value” goes to the processor, not the farmer. The NC legislature recently decided to outlaw smokable hemp (potentially the most valuable hemp component for farmers) in June 2020, so time will tell what will happen with that market.

Many farmers and others in the agriculture industry had high hopes for hemp: it was going to be the “new tobacco”, allowing farmers to make a solid profit. Hemp may yet prove to be a good crop for North Carolina farmers, but there are many kinks yet to be worked out before the risks outweigh the benefits.