NC Peaches – the Taste of Summer

Find this article at:
go.ncsu.edu/readext?417712
— Written By Paige Burns 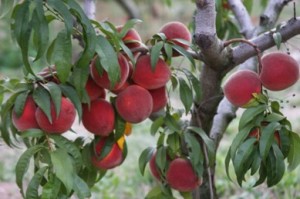 Incredible as it may seem, it’s already July, and we’re hitting the peak of summer. And summer means peaches. They just taste like summer!

I was born in Miami, Florida, and I remember as a child eating oranges, grapefruit, and avocados from the trees that grew in my grandmother’s yard. I even cracked open coconuts from the many coconut trees that grew abundantly in South Florida – this was before the Lethal Yellow disease decimated most of the coconut palms in the region. Despite such a luxury of tree fruits from my youth, I still think nothing beats the beauty and taste of a tree ripened peach. In Richmond County, we are fortunate to have several orchards here and in the surrounding counties. Many people drive for hours to the peach orchards that are practically at our doorstep!

Peaches originated in China, but have adapted quite well to North America. California is the number one peach producer in the US, followed by Georgia, South Carolina, New Jersey, then North Carolina. Here in the Sandhills, we have a venerable and romantic history with peaches. After World War I, many wealthy Northerners came down to the Sandhills as part of a “back to the land” movement in reaction to Industrialization in the North. Peaches were one of the primary crops they grew. The memoir Sand In My Shoes, by Katharine Ball Ripley, is a wonderful recounting of the trials and tribulations of the young, optimistic, and energetic new farmers who came to the Sandhills to get rich growing peaches. The community of Derby is named for Roger Derby, who was one of the premier members of the group. At the peak of peach production in the Sandhills in the early part of the last century, there were 300,000 acres of peaches; now, there are just around 3,000 in the entire state.

None the less, our peach growing legacy is one we should honor and appreciate. In North Carolina, peaches are tree ripened and packed in the orchard. This means NC peaches are more delicious than any other. Peach growers in other states often grade peaches and pack for shipping. The peach is picked “mature” – less than ripe – so it can withstand the rigors of bouncing down a pack line, graded, packed, and stored before being shipped out. North Carolina growers got out of the shipper market decades ago, and you can taste the difference.

Not only do NC peaches taste better, many are distinctly North Carolinian, developed at the Sandhills Research Station in Montgomery County by NC State University. They have names like “Derby”, “Candor”, “Norman” and “Windblo”. Get to know your peach varieties! Each variety has a taste and quality that is unique. Many love the Windblo peach – one of the early freestone varieties that come off about this time – for its non-browning characteristics, making it excellent for canning. However, other varieties such as “Contender” and “Carolina Gold” were developed from Windblo, and have similar non-browning characteristics. Customers look forward with great expectation to the freestone peaches that ripen in July. In fact, many people will often pass on the first peaches of the season, “cling” peach varieties, holding out for the freestones, under the mistaken idea that cling peaches aren’t as good. “Cling” and “freestone” refer to the flesh of the peach that holds tight to the pit in early peaches, but let go of it in later maturing varieties. However, cling peaches, such as Derby, Clayton, and Rich May, have a wonderful flavor and texture and I think offer some of the best flavor of any peach! Life – and peach season – is too short to pass up on any opportunity to eat an NC peach!

Occasionally I’ll get calls from homeowners who want to grow their own peaches. But there are few things more challenging to grow than a peach. My recommendation is to buy from the local growers and enjoy the fruits of their labor. Bynum Farm in Windblow, Triple L Farm in Derby (both have their own peach orchards), and the Berry Patch in Ellerbe sell local peaches. There’s also a great opportunity to relish the Queen of Fruit at the annual Candor Peach Festival, always held the third Saturday in July, in Montgomery County.

Enjoy the taste of summer!