Find this article at:
go.ncsu.edu/readext?354329
— Written By Paige Burns 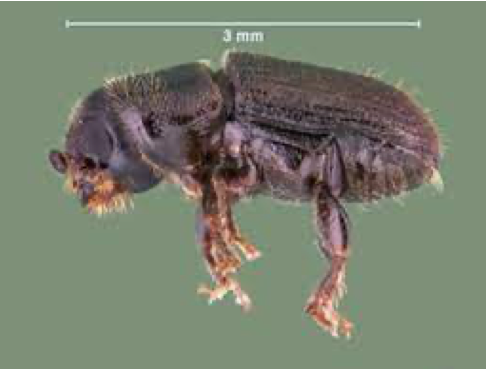 I frequently get phone calls from concerned homeowners about insect infestations of trees in their landscape. Trees may be dying, or they observe holes in the tree bark or dying trees, indicating a problem. Their frustration is not helped when I have to inform them that there is little that I can do to help, and that their options for control are few.

There are a number of different wood boring beetles that are pests on trees in our area. They include the southern pine beetle (SPB) and Ips beetle, which may infest pine trees. The ambrosia beetle attacks both pine and some hardwood tree species, and can be quite a pest in ornamental trees and in fruit tree orchards. All of these species are surprisingly small, considering the death and destruction of trees they can cause, with some measuring just a tenth of an inch in length. Much of the damage comes from the boring and tunneling into the tree, as the female creates places to lay eggs. The southern pine beetle and Ips beetle (a group of beetles with several different species) create galleries under the bark. This extensive tunneling reduces the ability of the tree to transport water from roots to the upper portion of the tree. Distinctive differences in tunnel shapes can provide identification as to which species is the culprit. In addition to the physical damage of the tunnels, both SPB and Ips beetles also infect the tree with a fungus which clogs the water transport vessels, further debilitating the tree. This can be a real problem in forestry plantings, as the blue color of the fungus devalues the wood for timber purposes. The ambrosia beetle, which looks very similar to the SPB, targets young, thin-barked trees such as dogwood, Japanese maple, and ornamental cherry, among many others. It also introduces a fungus into the tunnels of host trees. The ambrosia fungus provides food for the developing larvae, but it blocks the water transport vessels of the trees, causing eventual death. The activity of ambrosia beetle may also create entry points for other plant diseases, such as Fusarium. All beetles begin activity in the early spring and, depending on the species, may produce several generations throughout the summer.

Often the earliest indications of a problem are the outward signs of the beetles boring into the trunk. These signs can be diagnostic. SPB creates small pitch (sap) tubes covered with sawdust, which look somewhat like popcorn from a distance, covering the bark. Ips beetles do not create pitch tubes, though reddish sawdust may be sprinkled down the bark crevices of the tree. Ambrosia beetles create a very distinctive “toothpick” of sawdust that sticks out from the bark for an inch or so. These fragile structures may be washed away by rain, leaving only a hole about the size of a pencil lead in diameter.

The most frustrating aspect of these pests is the challenge of prevention, or eradication once a tree is attacked. In the case of ambrosia beetle, home owners have a few products available that contain the active ingredient permethrin or bifenthrin that may be sprayed on the trunk, such as certain Spectrum, Ortho, and Bayer Advanced products. Examine the label for these active ingredients and for some type of borer listed on the label. “Granulate Ambrosia beetle” will not specifically appear on the label. For the SPB and Ips beetle, permethrin may be used but spraying multiple trees is expensive and not very effective, as many of the beetles attack the tree high on the trunk. Keep in mind all of these treatments are preventative: once the trees are infected, there are no pesticides which can reach the beetle inside the tree. Systemic insecticides such as imidicloprid have not been shown to be effective, as the beetles do not feed on vascular tissues.

What is a homeowner to do? The most effective management for tree boring beetles is keeping trees healthy so they are able to withstand attack. Often, a weak or unhealthy tree emits odors that actually attracts the pests, in the case of SPB and the Ips beetle. The sick tree is the launch pad to a wider infestation, allowing pest buildup before attacking surrounding, healthy trees. Keeping trees healthy includes preventing stress inducers such as: soil compaction (from parked cars); trunk damage from weed eaters, lawnmowers, or equipment, drought stress, or nutrient deficiencies. Trees that are severely sick or damaged, by either insect infestation or lighting strike, for example, should be removed. This will prevent beetles from taking hold in a weak tree and spreading to surrounding trees.

By keeping your trees healthy, you can reduce the susceptibility of trees to these pests, and give them a fighting chance against these small, but devastating, beetle pests.

For more information on managing your trees, contact Paige Burns Clark at lpburns@ncsu.edu or 910-997-8255. Also check out our website at N.C. Cooperative Extension Richmond County Center.