Managing Scale Insects in the Landscape

Find this article at:
go.ncsu.edu/readext?342007
— Written By Paige Burns and last updated by Leeann Crump 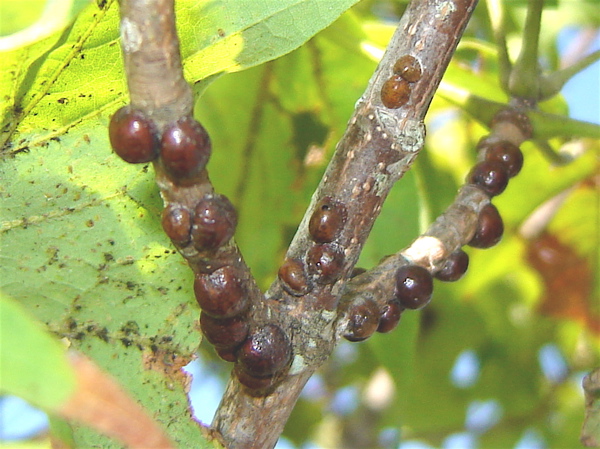 As winter begins to wind down, now is a good time to scout your plants for scale insects. Scale insects are a diverse group of pests that live on a wide range of plants, especially woody ornamentals. Camellias, laurels, maples, and euonymus are among those plants often troubled by this pest. There are two different types of scale, armored scale and soft scale, with many species in each group.

Armored scale insects are quite small, usually less than 1/8” in size depending on the species. They are called “armored” because the female is covered with a hard covering created by waxy secretions. This shell protects the soft bodied insect underneath as well as the eggs laid by the female. Once the eggs hatch, the larvae move out from under the protective cover of the mother. It is this larval stage, called the crawler stage, that scale insects are most vulnerable to pesticides. Once crawlers become adults they produce the waxy secretion that protects them and they attach to the plant, becoming immobile and feeding on plant juices.

Armored scales vary in shape from circular to elongate, sometimes resembling an oyster shell. Males and females may look quite different in size and shape for the same species, with the female usually larger. Armored scales may overwinter as eggs, nymphs, or adult females. Because armored scale are small and inconspicuous, populations may build up unnoticed and cause serious damage to plants. Signs of armored scale infestation include leaf drop, yellowing leaves, and branch dieback. Drought and other stresses can make plants more vulnerable to scale. Common armored scale pests are Euonymous scale which, as the name suggests, is common on many species of euonymous, and tea scale, often a pest on camellia. Gloomy scale is common on maple trees, and can be hard to see as the scales blend in with the grey bark.

Compared to armored scale, soft scales are relatively large and may look fluffy or like a ball of white wax, so in the adult form are easy to see. If an adult soft scale is turned over, one can see the legs, antennae and thread-like mouthparts with the help of a microscope, and they do not have a removable shell covering like armored scale. In addition to feeding on plant juices, soft scale impact plant health by secreting honeydew, which is high in sugars. Honeydew causes a secondary problem, a fungal disease called sooty mold, which covers the bark and leaves with a black substance resembling soot. Sooty mold impacts plant health by blocking photosynthesis from occurring in the leaves.

Soft scales reproduce sexually or parthenogenetically (where young develop from unfertilized eggs). Tremendous populations can develop during a single growing season. Some of the more common species include Indian wax scale, which is a white, waxy scale common to hollies, laurel and many woody plants. Other soft scale include Oak lecanium scale and Cottony maple leaf scale.

Control of all scale species is challenging because of the protection from pesticides provided by the wax and armor covering. The crawlers are vulnerable to pesticides, but catching them at the right time requires knowing the species and monitoring when the crawlers leave the protection of the adult female. Dormant oils and horticultural oils, which are primarily used during the cool winter months, are effective on scale insects if properly applied. The oil covers the insect and essentially smothers it. Keep in mind that many scale insects are well controlled by beneficial insects such as lady beetles. If you decide to spray, try to avoid the use of insecticides such as orthene that will kill beneficial insects.

If you aren’t sure if you have a scale insect problem, bring a plant sample that shows symptoms or signs of the pest into the Cooperative Extension office for identification. If you should have a scale problem, these last few of months of cool temperatures are the time to treat with horticultural oils before the growing season begins. For more information contact the Cooperative Extension office at 910-997-8255 or visit our website at richmond.ces.ncsu.edu.