How to Pick the Perfect Pumpkin for Eating or Carving

Find this article at:
go.ncsu.edu/readext?323595
— Written By Paige Burns and last updated by Leeann Crump 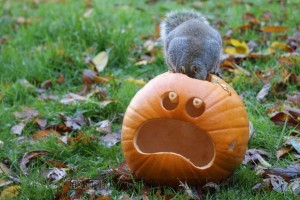 This time of year, pumpkins and pumpkin-themed (flavored, scented, you name it!) items are everywhere.

Pumpkins are native to North America and were used by Native Americans before the arrival of Columbus pretty much the same way they are used today — as both decoration and food. A pumpkin may be one of several different species, though they are all in the same genus, Cucurbita, which according to Wikipedia is Latin for “gourd.” The primary species are C. maxima, C. moschata, and C. pepo. Different pumpkin species and varieties may be used in different ways, but knowing which is best for your specific purpose will give you the most successful outcome.

For most families, purchasing a pumpkin this time of year means pumpkin carving. The spooky or silly carved face of a pumpkin sits on many porches waiting for the big night of trick-or-treating. Jack-o’-lantern pumpkin varieties have the scientific name Cucurbita pepo and possess a uniform color and shape that makes for easy carving. They have relatively little interior flesh (thin-walled) and a flat bottom so they can sit upright. While jack-o’-lanterns are excellent for carving, they may not be the best option for cooking.

If you are interested in making your pumpkin pie starting with the pumpkin itself, choose one bred for best taste and texture for cooking. You can find “pie pumpkins” or “sugar pumpkins” at farmers’ markets and produce stands. Pie pumpkins look similar to jack-o’-lantern types, and indeed are the same species, but they are a variety selected for traits suitable for cooking. They tend to be smaller, darker orange and more dense (heavier for their size), with a sweeter, less stringy flesh than a larger jack-o’-lantern type.

Another excellent pumpkin to consider for fall cooking and decorating is Cucurbita maxima. This pumpkin is excellent for pies and very attractive as well, though not good for carving. These are often blue-green pumpkins, with deep sutures and a lovely, somewhat bumpy, texture. This same species includes the so-called Fairytale pumpkins, which look as if the wave of a magic wand will turn them into a carriage.

The Fairytale pumpkins are very attractive pumpkins for display, with deep ribs and unique coloration, in shades of beige and green. C. maxima species also includes the beautiful, pure-white pumpkins that have recently become more widely available. All are suitable for cooking. Other excellent cooking pumpkins include a third species, Cucurbita moschata. These are typically buff-colored pumpkins, broad and rather flat. One variety has the unexpected name “Long Island Cheese!”

Pure pumpkin, whether canned or homemade, is an excellent source of fiber, vitamin A (in the form of beta-carotene, an important antioxidant), vitamin C and potassium. Eating foods rich in beta-carotene may reduce the risk of developing certain cancers and helps protect against heart disease. Antioxidants also protect the body against the degenerative effects of aging.

Is it worth the extra trouble to make your own pumpkin puree rather than buy in the can? Many “foodies” would say the freshness and taste is worth it. Canned pumpkin has all the health benefits of homemade puree, however. If buying canned pumpkin, make sure you are getting the pure pumpkin. “Pumpkin pie filling,” also available in a can similar to pure pumpkin, has higher salt and caloric content than pure pumpkin.

One thing you get when you make your own pumpkin puree (or carve a jack-o’-lantern) is seeds! Cleaned and roasted in the oven, pumpkin seeds are a delicious and healthful snack or crunchy addition to a salad or soup.

This year, think beyond mums for your fall decoration. If protected from rain, pumpkins can last for weeks, adding beauty to your front porch or dining table. And by choosing your pumpkins carefully, your attractive fall decorations may end up in a delicious pie by Thanksgiving!