Insects in the Garden

Find this article at:
go.ncsu.edu/readext?608921
— Written By Paige Burns 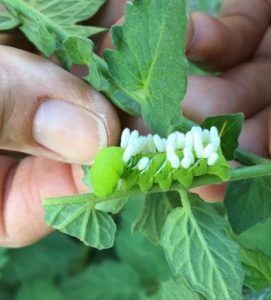 Although I’m not an entomologist, I really enjoy seeing bugs and insects in nature and in the garden. I know that not every insect is a pest. However, there are some insects that seem to show up to ruin your garden every time. Maybe one is in your garden right now, causing ruination.

One of them is the Leaf-footed bug. Leaf-footed bugs are related to squash bugs and stink bugs (they all give off a “stinky” smell when squished). All members of this family have what is characterized as “piercing, sucking mouthparts”. Basically that means they do not have “chewing” mouthparts. If you are seeing holes in leaves, you know the suspect isn’t anyone in this family. Instead of chewing up plants, they insert their “beak” into the fruit and suck out the juices. On tomatoes, signs of feeding are pale or white spots where the developing cells are damaged, and do not ripen correctly. These insects are not readily killed with insecticides, and those that are effective will kill beneficial insects and pollinators, such as honeybees, as well. For example, Sevin, a very effective insecticide, is deadly for bees, particularly the dust formulation. Honeybees will take the dust they pick up when pollinating tomato flowers and carry it into the hive, where it can kill or weaken honeybees. The best way to handle members of the stink bug family is keep a clean garden, limiting weeds and piles of debris where the insects can over winter and breed. Hand picking is an easy, cheap, and effective way to manage. Take a jar of soapy water out to the garden and knock the insects into the jar. The soapy water breaks the surface tension of the water, so they sink immediately to the bottom. In the morning when it is cool, the insects are not as active as they are when things warm up. Keep an eye out for the nymphs, which look very different from the adults. Leaf-footed bug nymphs are bright red with black legs, while squash bug nymphs are grayish-white. They bunch together when they first hatch, which is a good time to get them. Eggs are a shiny bronze color, football-shaped, usually on the underside of the leaf and against a vein. Scrape these off with a fingernail or, if you’re squeamish, with a small knife.

Another garden pest I’ve run into quite a bit this year are hornworms. There are two common hornworm pests in the garden: tomato hornworm and tobacco hornworm. They are very similar in appearance: bright green, with a narrow white “swoop” and black dot on each segment. There are some additional markings on the side of the tomato hornworm and the “horn”, which is located on the last segment of the caterpillar, is black rather than red, as it is on the tobacco hornworm. Both feed exclusively on solanaceous plants, primarily on tomatoes and tobacco, although occasionally on peppers and eggplants. Vigilance is the best management tactic for this pest. Scout tomato plants at least daily, looking for signs of feeding or frass (the technical term for insect poop). Pull off offending caterpillars and destroy (pro tip: chickens will not eat them). There are many predators of hornworms: predatory wasps capture small worms, paralyze them and feed them to their developing larvae. Hornworms are also common victims of parasitic wasps. These tiny wasps lay their eggs inside the hornworm. As the wasp larvae develop, they feed on the living hornworm. Finally, the baby wasps create small white cocoons, like grains of rice, that rest on the surface of the hornworm, prior to their final stage of development. If you find a hornworm with wasp cocoons, be sure to leave it in the garden, to allow the wasps to continue to populate and attack future caterpillars. If these tactics fail to keep up with hornworms, using an insecticide with the active ingredient Bacillus thuringiensis, or Bt, is excellent for managing caterpillar pests. Bt is a naturally occurring bacterium which attacks only caterpillars, so it will not injure honeybees or other pollinating insects (although if sprayed on butterfly larvae, such as swallowtail caterpillars, it will kill them as well). Bt is most effective when caterpillars are small. Insecticides containing Bt are commonly found in big box stores and farm supplies.

Be aware that there are beneficial insects that can be mistaken for pests. Swallowtail caterpillars, also called carrotworm, will eat parsley. There are several predatory species that resemble members of the stink bug family. These include the aptly named assassin bug, and the spined soldier bug, among others. There are many websites that can help you identify the beneficial insects from the pests, or bring a specimen to the N.C. Cooperative Extension of Richmond County office at 123 Caroline Street for identification. We’re here to help you have your best garden ever this summer!