Extension@YourService: Tree of Heaven – Maybe Not So Much

Find this article at:
go.ncsu.edu/readext?540459
— Written By Paige Burns and last updated by Leeann Crump

You are probably familiar with the saying: “Can’t see the forest for the trees”. It’s an expression that represents getting so bogged down in the details that you miss the big picture. I had the opposite experience recently. I have moved to a new home which is surrounding by woods. Sitting down for a few minutes, resting from some gardening, I actually looked at the trees in the woods, paying attention to what they were for the first time. What I saw was alarming: Ailanthus altissima, commonly known as Tree of Heaven and considered very invasive, had gained a foothold in the woods and was starting to creep into my backyard. 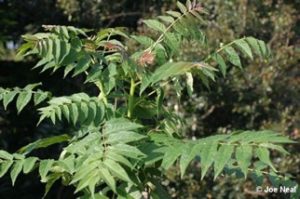 Tree of Heaven is a deciduous tree (it loses its leaves in the fall) that can get up to 80 feet tall. It grows very quickly, hence the common name. The tree has pinnately compound leaves, meaning multiple leaflets running along the stem, like a giant feather. Leaflets can number from 10 to as many as 40. Tree of Heaven leaves, when crushed, have a smell strongly reminiscent of peanut butter, which can help confirm identification. Tree of Heaven flowers in June and July, a cluster of pale green flowers that darkens to deep red as the seed matures. Viable seeds are set on trees just a few years old, so it can begin to reproduce quickly. Another important mode of reproduction is by root sprouts, which can grow 10-14 feet in the first year.

Tree of Heaven, native to China, was originally imported and used as a landscape ornamental as early as the late 18th century. It is easily established, and will grow virtually anywhere. It is invasive in urban environments, where it will often get established in small cracks next to buildings, sidewalks, and retaining walls, where it will take over. It has traits which help in its establishment: for one, leaves are unpalatable to deer, so trees aren’t eaten. The leaves contain toxic, allelopathic compounds which, as they decompose on the ground, suppress the germination of seeds and root growth of competing plants. This strategy allows Tree of Heaven to suppress its competition and take over large areas. According to a USDA fact sheet, Ailanthus is well established in California and the US Northeast, and becoming more established throughout the south. A 2008 estimate states that the tree is present in over 214,000 acres of southern forests.

To help prevent the spread of Tree of Heaven in your slice of NC, there are several steps that you can take. First, once you have the ability to correctly identify the tree, monitor your property regularly, especially in June and September, as this is when control efforts can be most effective. Spread the word so that others are made aware of this invasive species. If you determine you have Tree of Heaven on your property, mechanically remove the plant from the landscape. Smaller plants are easy to pull out (this is why frequent monitoring is helpful). Frequent cutting may help keep the plant from going to seed, although an established tree will re-sprout from the roots. Applying herbicide to a freshly cut stump will help reduce the chance of the tree re-sprouting. Glyphosate at a high percent or undiluted, applied with a brush or wand, is effective. This should be done during the growing season months of July through mid-September, however, it is pretty effective during dormant months as well, as long as you can identify the tree when it is defoliated. Foliar application with herbicide of smaller specimens also works, however there is the possibility of damaging nearby plants with foliar spray, and retreatment will likely be required.

There are several species of native woody plants that look similar to Tree of Heaven, including various species of sumac, hickory, and black walnut, so make sure you are targeting the invasive plant, not a native. One distinguishing characteristic is the leaf margins of most native look-alikes are serrated (with uneven, ragged, or toothed edges), while the leaf margin of Tree of Heaven is smooth except at the very base of the leaflet, where there are two glandular teeth. However, the telltale smell of peanut butter (or, for some people, it just plain smells bad) from the crushed leaves is an excellent confirmation that the tree is ailanthus.

This article will be published in the Richmond County Daily Journal the week of July 30, 2018.