Find this article at:
go.ncsu.edu/readext?523123
— Written By Paige Burns and last updated by Leeann Crump

Eastern red cedars are native to our region, and as such have few pests or diseases that plague them. An interesting one that does is cedar-apple rust. Cedar-apple rust is subtle; it is very environmentally dependent, and short-lived in it’s most noticeable form, so timing is everything when it comes to spotting it. When unsuspecting homeowners discover CAR during its peak, it can seem almost unreal – possibly not from this planet. Then they start bringing samples into my office. 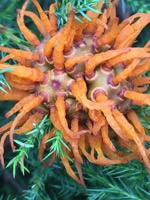 Cedar-apple rust is a fungus that survives on two alternate hosts: one, Eastern Red Cedar, the other, apple trees. Gymnosporangium juniper-virginianae, to use its scientific name, is brought on by cool spring rains, which jump start activity of galls on the cedar tree. The galls, which before the rain are innocuous, brown globes about the size of a golf ball, scattered throughout the tree like dull Christmas tree ornaments, are brought bizarrely to life by rain. The galls sprout bright orange, gelatinous horns, which contain millions of spores. The process of wetting and drying, and the production of jelly-like horns, occurs with each spring rain. In a complex development, the orange horns produce a spore type called teliospores, which then themselves create basidiospores. The basidiospores disperse into the air to find nearby apple trees on which to complete the life cycle. Temperatures between 46 to 75 degrees and wet leaf tissue create an environment where apple trees can be infected. CAR can be quite damaging to apple trees, where the fungus is characterized by colorful, raised spots on the leaves and sometimes fruit. On susceptible varieties, it can be quite destructive.

That’s just the first half of cedar-apple rust’s life cycle. As summer wears on, the spots on the apple leaves, and sometimes the fruit, develops into another fungal type which produces a different type of spore, called aeciospores. In late summer or early fall, aeciospores are blown onto cedar trees, where they germinate and produce galls, thus setting the stage for the cycle to start over again. The gall will survive for two years in this dormant state, and with the spring rains in the second year, the sprouting orange horns of teliospores will start the cycle again, after which the pathogenic fungus in the gall will die.

On cedar trees, CAR is a minor problem, sometimes causing twig dieback. If so inspired, remove the dormant galls and destroy. Apple trees may need more serious intervention. Start by planting resistant varieties. The most susceptible varieties include Gala, Braeburn, Jonagold, and Mutsu. Sprays to manage fungal diseases (captan plus sulfur) in general should begin when green tissue begins to appear, and repeated at 7-day intervals until flowers begin to open (after petals fall, apply fungicide plus insecticide sprays every 2-3 weeks, until 3 weeks before harvest). If cedar apple rust is present, include myclobutanil (sold under various trade names) in the fungicide sprays beginning at tight cluster (of blossoms) and continue for one month after bloom. If myclobutanil is used, you do not need to include sulfur in the spray program.

When you or someone you know inevitably spot the fluorescent orange horns of cedar-apple rust, you now know it is not an alien from outer space, but a fascinating example of the mysterious lifeforms we have here on earth. For some good, clean fun: find a gall with dried horns, cut it out of the cedar tree, and place it in a glass of water. Watch over the next few hours as the horns expand. You now have a pet teliospore.