The Fungus Among Us

Find this article at:
go.ncsu.edu/readext?494269
— Written By Paige Burns and last updated by Leeann Crump 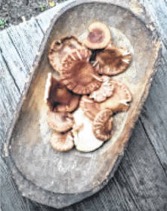 Shiitake mushrooms are edible and easy to grow. (Photo by Paige Burns)

Fungus gets a bad rap. Yes, there are many molds that spoil your food, fungi which cause plant diseases that wipe out your tomatoes, or a yeast that makes your feet itch. I often get calls from people complaining about the mushrooms growing through their grass (called “fairy rings,” which I think is a romantic enough name not to do anything about them) or in their hardwood mulch (“stinkhorn” mushrooms, which are admittedly disgusting but can simply be shoveled up and thrown in the trash). Maybe you haven’t thought about a world without fungi. Have you ever stopped to consider what fungus has done for you today?

Fungi is a very large group of organisms in their own kingdom (fungi), which is separate from the plant and animal kingdoms. Fungi include yeasts, molds and mushrooms, to name a few members you may recognize — an estimated 2 million plus species, many of which have yet to be fully understood.

A world without fungi would mean: no beer, no wine, no coffee, no bread — no chocolate! These are just a few of the foods we consume that rely on fermentation (performed by various yeasts) which have been so important to humans over the millennia. Without fermentation, humans could have died out from drinking water containing disease-causing bacteria (which most of the water had) thousands of years ago. Through fermentation, creating fermented drinks, humans could hydrate without making themselves sick. Now that autumn is here, leaves are beginning to coat the ground. It is thanks to fungus that leaves decay and return the valuable nutrients they contain into the soil to be recycled and used again by plants in the spring. Without fungi, living things would not decay and we would be drowning in dead organic matter that would pile up.

Most mushrooms are in a group called club fungi. The organ we identify as a “mushroom” is the fruiting body of certain fungi. Mycelia are the delicate web-like strands of the fungus as it grows and consumes its food (usually carbon based, but more on this later). At a certain point, often triggered by completed consumption of a food source, or by weather (temperature and moisture), the fungus will fruit. It’s easy to orchestrate this at home. Many delicious, healthy — and costly, in the grocery store — mushrooms can be grown easily by homeowners. Shiitake mushrooms are almost ridiculously easy, but there are others, such as oyster mushrooms, which can be done as well. Wonderful “wild” mushrooms can be foraged in the woods: chicken of the wood, lion’s mane, chanterelles and morels are just a few of the highly prized — and valuable — mushrooms that can be found in our region. However, foraging of wild mushrooms should not be attempted by the novice. Some wild mushrooms are extremely toxic, potentially deadly, and not necessarily distinguishable from non-toxic mushrooms to the untrained eye.

In addition to the value of grown or foraged mushrooms, which can be sold to high-end restaurants (North Carolina requires a certification to sell wild mushrooms), research is revealing amazing potential for mushrooms that help resolve some of our biggest problems. While most mushrooms feed on carbon (typically hardwood), others have the ability to consume and recycle trash, everything from organic waste (such as the detritus left over after a hurricane) to plastic.

Research is demonstrating some very specific fungi that can replace pesticides, including one that attacks fire ants, and another that kills a very troublesome pest of honey bees, the varroa mite. Some types of fungi have the ability to consume and detoxify contaminated soil. Called Mycoremediation, fungi can be used remediate contaminates ranging from pesticides to petroleum, toxic chemicals and heavy metals. Except in the case of heavy metals, the materials are completely detoxified and the mushrooms can even be consumed.

In addition to environmental benefits, new medical research is demonstrating the amazing potential of mushrooms’ health benefits, such as immune boosting, as an antibiotic, as virus and cancer-cell disruptors, or even stimulating the growth of brain cells. The small bird’s nest fungi, which I recently identified for a client, appears to have a profound effect on the often deadly pancreatic cancer, through an extract derived from the mycelia. There’s even research on ways fungi can be used as a building material: turkey tails, a common shelf mushroom, has mycelia that can hold 800 to 1 million times its own weight.

There are numerous books and resources online to learn more about mushrooms, including a Facebook group, North Carolina Mushroom Group, where members post photos of mushrooms they have found for help in identification. On Nov. 15, there is a Mushroom workshop in Scotland County for those interested in trying their hand at growing their own. Call Scotland County Extension at 910-277-2422 for more information. Space is limited. Remember, the fungus is among us! Get to know them!