Brassicas: All in the Family

Find this article at:
go.ncsu.edu/readext?485756
— Written By Paige Burns and last updated by Leeann Crump

Brassica is a genus of plants, primarily annuals but some perennials, in the mustard family. Remember taxonomy from high school science class? Kingdom, phylum, class, order, family, genus, species. There are many important crops in the brassica genus, but what is interesting to me is the species, Brassica oleracea. This one species represents some of our most commonly eaten vegetables. It includes broccoli, brussels sprouts, cabbage, cauliflower, collards, kale and kohlrabi. Yep – all of these crops are not just the same family or genus, they are actually the same species, bred by humans over many years to accentuate different features. They all hail from the same ancestor: wild cabbage, a biennial that grows in isolated areas of England and Europe. It first appeared as a cultivated vegetable during Greek and Roman times. B. oleracea cultivars are arranged in groups representing their differing aspects. For example, kale and collard greens are in the Acephela group (“non-heading”), and are most similar to the original wild cabbage. Culinary preferences in countries across Europe gradually selected for specific traits. To develop the cabbage we are now so familiar with, the more leafy cultivars were selected for a vastly enlarged terminal bud, where leaves are tightly stacked together. In the area now known as Germany, preference for a fatter stem eventually led to the development of kohlrabi around first century AD. In other areas, preferences for eating inflorescences (modified flowers) led to the development of broccoli by the 15th century in Italy, which eventually led to the development of cauliflower. In Belgium, preference for eating axillary (side) buds led to the development of Brussels sprouts. 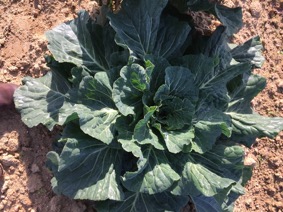 All brassica cultivars have very similar cultural requirements. They are “cool season” crops, best grown in the fall or spring in our region. Fall crops can work very well; the challenge is to start a cool season crop in August or September when temperatures may still be very high. Once temps cool down though, these crops can continue throughout the fall and, with a light row cover, even potentially into winter. In our fickle spring weather, those occasional spikes of temperatures in the 80’s can result in the premature “bolting” of the crop (when the plant goes into flower and seed making), which causes poor flavors. In contrast, cooling fall temperatures as the plant develops enhances flavors. Members of the brassica family have a unique system by which cold temperatures trigger high sugar content in their plant cells; the sugar acts like antifreeze in the cells, preventing damage. For humans, the increase in sugars enhances the taste.

Most brassica crops can be direct seeded, however they commonly transplanted. Soil pH should be between 6.0 and 6.4. Amend soil with compost or other organic matter as brassicas do not care for sandy, droughty soils. Plants are poorly competitive with weeds so mulch well to suppress weeds. Brassicas often need a little extra boron. If the stem of your harvested broccoli is pithy and hollow, low boron is the problem. If there is no boron in your fertilizer, mix 1 teaspoon of Borax/gal and spray on plants. Go easy on the boron – the threshold between deficiency and toxicity is very narrow, and cole crops have the highest need. Peas and beans are very sensitive to boron. It’s always a good idea to soil test if you haven’t done one in a few years. Brassicas have a fairly high nitrogen requirement, due to the large, nutrient heavy leaves they produce. In general, apply 5-10-10 at 3 pounds per 100 square feet before planting, then side-dressed once during the growing season. Side-dress with 34-0-0 at 1 pound per hundred feet of row or 15.5-0-0 (calcium nitrate) at 2 pounds per 100 feet of row. Pests are heavy on the caterpillars in this group: be sure to have Dipel on hand to control. Dipel is an insecticide that contains a bacterium which only attacks caterpillar species, so it is very safe for use around beneficial insects. Other potential insect pests, such as aphids, can be controlled with insecticidal soap; harlequin bugs and flea beetles with permethrins. Finally, as you plan your crop rotations, remember that any of these cultivars, plus any other member of the brassica or mustard family, should be rotated out of a garden spot for four years to avoid disease build up.

Humans have changed Brassica oleracea over thousands of years, reflecting the values and tastes of the region in which they were developed. And the process is still on-going! In Scotland County the Morris Family continues to develop and grow their famous “Morris Heading Collard”, which they have perfected over 100 years of careful selection. Which version of B. oleracea will you grow this fall?