Richmond County Center will be closed on Mon. 5/30/22 for the holiday.

What Happened to Winter?

Find this article at:
go.ncsu.edu/readext?450284
— Written By Paige Burns and last updated by Leeann Crump

Last year, the NC State Climate Office (SCO) of North Carolina had a prediction for Winter 2016-2017. The presence of a weak el Niña led the SCO to look back at the historical record to see how it would play out. El Niña is a weather system so named as the “opposite” of el Niño (“little girl” vs “little boy). An el Niña causes equatorial eastern Pacific Ocean temperatures to be cooler than typical, resulting in a warmer and drier winter in the US. The State Climate Office, after referencing historical el Niñas, and adding the impact of a polar vortex in the mix, predicted a colder than normal December and January, followed by a warmer than normal late winter/spring. They concluded their prediction by saying “the overall confidence in our temperature forecast is low given the many variable patterns in place at the moment.”

We certainly had some extremely cold temperatures in early January, with several nights dipping below 20 degrees. Comparing data across the years from the Sandhill’s Research Station (a weather station that connects to the State Climate office), this has been quite a dry winter, although overall this January was actually somewhat warmer than the past several years (by just a few degrees) despite those few nights of below normal temperatures. It is February that stands out this year: the average daily temperature this February (so far) is 53 degrees; in 2016 it was 45, and 2015, 36 degrees.

Another way to consider temperature and weather, in a way that crops, insects and nature can relate to, is by looking at Growing Degree Days (GDD). GDD is a way to measure the accumulation of heat over time that triggers plant and insect development in a predictable way. It is determined by starting with a base temperature (typically, with crops, 50 degrees) and a formula: the daily minimum temperature plus the daily max, divide by 2, and then subtract the base temperature. The resulting number is the gdd units which add up daily. Luckily, there are websites that do this work for you, and while they may not be exact to your specific location, it’s close enough to be a general rule of thumb (the site can be found on the NC State Climate office website, if you’re interested in looking at it). I chose the Laurinburg location as the one closest to Richmond County, and ran the units of GDD days for the past five years, from January 1 until February 26. Here’s what I found: 2012: 95; 2013: 124; 2014: 64; 2015: 37; 2016: 78.

Basically, we’re not through February yet and we’ve already accumulated the growing degree day units we typically achieve by the end of March or later.

According to data from the National Oceanic and Atmospheric Association (NOAA), February in the southeastern portion of the United States has broken thousands of record highs across the region. Obviously, this is quite confusing for plants and insects. Hence we see peach trees blooming and strawberries already ripening. While it’s enjoyable for us humans to be outside, enjoying 70 degree temperatures, it raises the specter of a major horticultural disaster later in the spring. In 2007, the Sandhills was the coldest region of the state at 19 degrees in April 7-8 and almost the entire peach crop was lost that year. Last year, a late cold snap (in early May) did a number on the peach crop as well, with significant crop losses across the Sandhills. NOAA predicts a warmer than usual March and April this year. The good news: one experienced Sandhills peach grower stated he had seen peach trees bloom in February 3 times in his decades long career, and each time he made peaches.

As the saying goes, if you don’t like the weather in NC, wait a couple of days – it will change. Weather can turn on a dime. On the other hand, climate represents long term data that can indicate larger trends. According to NOAA, 2016 was the warmest winter on record; this is a record that broke the record of 2015, which was then the warmest year on record, which itself broke the record of 2014 as the warmest year on record. Three years of record breaking warm temperatures, globally. The trend of warmer temperatures has been ongoing since 1978, and every year this century has represented the highest ever recorded temperatures, except for 1998, which also broke temperature records. Temperature records have been kept since 1880. 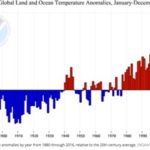 People may debate the causes of warming temperatures, but data doesn’t lie. Global temperatures are warming. And this has profound impacts on sea levels, rain fall, drought, crop production, and more. The challenge of the twenty first century: how to manage the impact of increasing global temperatures in a way that prevents major disruption of human existence.

It puts the potential loss of the 2017 peach crop in perspective, although we hope for our sake -and the farmers’ – that we’ll have peaches this year.