Extension@YourService: Snakes Are Our Friends

Find this article at:
go.ncsu.edu/readext?415988
— Written By Tiffanee Boone and last updated by Leeann Crump

The best advice we can give to someone who calls the Extension office because they saw a snake in their yard is to “leave it alone”! And an even greater challenge is when someone brings a chopped up snake into the office for identification. There are several reasons why we should leave snakes be.

The main reason is because most people get bit while trying to kill them. If you can reach a snake with a shovel or hoe, they are within striking distance of you. If you are ever bit by a poisonous snake, you should call 911 right away. Never use a tourniquet, cut the wound, suck out the venom, or pack the wound in ice. Out of the 7000-8000 venomous snakebites that occur each year in the US only 5 or 6 of these bites result in death. Nonvenomous snakebites should be washed with warm soapy water and a tetanus shot may be needed. 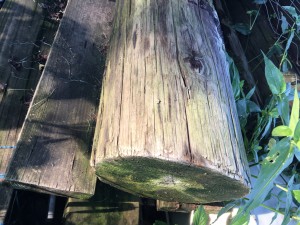 A typical habitat for snakes is wood piles.

The second, and also very important reason to leave snakes alone, is because they are our friends. They eat mice and rats that carry disease. Most people who bring in a dead snake, then call our office within the month asking how to get rid of rats and mice. When you kill a snake and then the mouse population gets out of control, you have caused your own problem. Snakes are living close to your house for a reason.

There are only 6 poisonous snakes in North Carolina. They are the Eastern Coral Snake, Copperhead, Cottonmouth, Carolina Pigmy Rattlesnake, Eastern Diamondback Rattlesnake, and the Timber Rattlesnake. There are 31 other snakes that are not poisonous, so you are much more likely to encounter the non-poisonous kind.

Snake bites can also cause problems with horses that get bit in the face. This is because they can’t breathe very well through their mouth. So, a swollen nose can interfere with oxygen supply. Horses that get bit in the nose should be examined by a veterinarian. Most other larger livestock and pets can survive a snake bite. However, snakebites to small pets can be fatal.

If you want to identify a snake, you don’t have to bring it into our office to do so. You can just learn to identify the poisonous ones. They have catlike eyes with slits, a triangular shaped head with pits on both sides (except Coral Snakes), and one row of scales on the underside end of their tale (except Coral Snakes). Non-poisonous snakes have black eyes, rounder heads, no pits, and two rows of scales on the underside end of their tail. Proper identification can also help medical personnel select the most appropriate treatment in the unlikely event of a bite.

If you ever find a snake in your house, shooting at it or chopping it with a hoe might not be the best response. People have really messed up their houses in this way, including tearing up the plumbing work. Another choice might be to open the door and herd the snake in the right direction without getting close to it; or call a pest removal company.

Children should be taught to respect snakes but not fear them. People who are scared of snakes may want to consider getting a cat. Cats eat mice and rats and scare off snakes, which may help solve both problems. You can also keep grass short and get rid of old piles of wood or scrap metal; they like to hide and take cover in such areas as does their food supply.