4-H Showmen Showing Does at the State Fair

Find this article at:
go.ncsu.edu/readext?322696
— Written By Tiffanee Boone and last updated by Leeann Crump 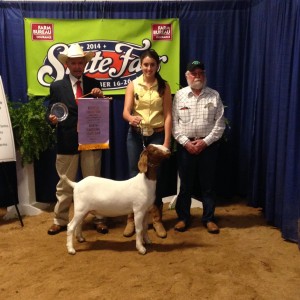 2014 NC State Fair Reserve Champion Doe Showman, Madelyn Chappell is pictured here in the middle with the judge on the left and the goat breeder, John McInnis on the right.

Eight Richmond County youth displayed their commercial breeding does. They have been working with their animals since June and the animals returned after the State Fair to the farm to be bred. Youth competing in the Junior Meat Goat Doe Show included Coleman Berry, Jordan Carroll, Madelyn Chappell, Savannah Chappell, Abigail Hamilton, Brianna Hamilton, Savannah Shepard, and Payton Smith.

Congratulations to all of these young people and special thanks to all of the parents, grandparents, aunts, uncles, and community members who traveled to the fair to support these youth as they strive “To Make The Best Better” in Richmond County!